The plant was founded in 1924. Within The Grate Patriotic War during heroic defense of Sevastopol employees of the plant “Molot” repaired tanks in the open air and under continuous bombardments. 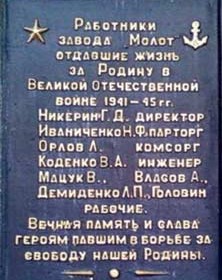 During post-war period the enterprise was reorganized into public enterprise “Sevastopol Electrical Repair Plant” and production facilities were relocated on the outskirts at that time, and now to the city centre – in Khrustalev street. The plant was subordinated to the Ministry of Housing and Utilities of USSR. Since that time all areas of activity has been connected with the branch of housing and utilities in anyway. In 1998 the enterprise was reorganized into Open Joint-Stock Company “Sevastopol Municipal Equipment Plant “Molot” and became a part of State Holding ” UKRKOMMUNMASH” , which included other 12 plants producing municipal equipment. On the grounds of the decision of General Meeting of shareholders of 21.12.2007 (minutes # 12) Joint-Stock  Company ” Sevastopol Municipal Equipment Plant “Molot ” was renamed into Joint-Stock Company “Molot” Plant”.